Robert Wharton, Andy and Ian pay tribute to songman Angus Rabbit who passed away this week. Robert sings ‘Share the Stars’ as a tribute to Uncle Angus and talks about the influence in his life of Uncle Angus.

Andy interviews Luke Byrne about the significance of folk in the environment and social justice issues. Andy catches up with Luke at the Students of Sustainability. Songs mentioned are Padlock and Chain which is about Metropolitan Mine at Woolongong and turned into being about opposition to mine at Maules Creek and then about uranium.  Bella Ciao is another that originates from traditional peasant women workers in the 19th century and became an  anti-fascist song for the Italian Partisans in World War II. 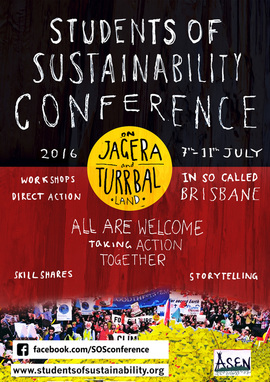 Evans is organising a big walk in August in Western Australia against the Uranium mining site at Wiluna in the WA Goldfields on Martu country.

At Invasion Day in 2012 when most of the leaders had gone to Canberra this non-indigenous woman spoke briefly at Parliament House and soon after at Jagera Hall Angus sang many of his famous songs.

4PR – Voice of the People