We speak with Bernard Keane, author of the new book “The  Mess We’re In – How politics went to hell and dragged us with it” about  neoliberalism, the internet and political disengagement. And about how we can try to work towards a better world. Listen @ http://4zzz.org.au/program/paradigm-shift/2018-09-21

Andy interviews Bernard Keane about the current world-wide malaise suffered in the economic, political and social spheres. This crisis is typified by such phenomena as the election of Trump in the U.S., Brexit in the UK, and racist populism in Europe. Keane notes that this is not new, that the Trump didn’t get that many votes and we’ve had versions of this political crisis before.

The Crisis
He says that there are three kinds of disruption that are causing the crisis that the like of which has not been felt since the 1930s: 1. Political disengagement 2. Neoliberalism 3. Internet Keane defined neoliberalism as the economic orthodoxy in place since the 1980s where there have been attempts to minimise government, introduce markets where they did not previously exist, reduce taxes and deregulate the economy. He said that wages have ‘marked time’ and this system has stopped working for the majority of people. This has resulted in social dislocation disengagement and disaffection.

Neoliberalism
In his book Bernard Keane claims this has led to dissolution with the political system even though he says we are wealthier and enjoying better living conditions. Politics is less participatory. In the 1950s, 1 in 20 people were members of a political party now it is less than 1 in 100. This disengagement by voters has been accompanied by professionalised political parties. In the post war era politicians had some other career for example they were in business or were unionists. Now this has been outsourced to a political group who come from similar backgrounds and the politics is hollowed out and disengaged from the rest of the community. Right-wing populists have responded with slogans like ‘give back control to the people’. However Trump and other right-wing leaders are not offering greater control for the people.

De-politicisation
There are long-term forces at play. We have gone through a long period of growth in the post-war era. There has been a sectional contest over resources. Ideology has vanished with the fall of the Soviet Union. It is coming down to who manages the economy best. According to clean the biggest factor in this disengagement was the Iraq war in 2003. It was an illegal war without accountability and showed that the system served the powerful.

Internet
The Internet has had abroad impact causing disruption in a number of industries i.e. the media. Even though there has been automation over the past 200 years the Internet has a different form. It has had a dramatic effect on the way we communicate with the long-term social impacts. We became a different society with television but now the Internet has connected us up so that geography has been abolished. This has affected our brains. We do not remember as much – similar to the time when writing and print was introduced. The difference is the Internet has happened over the last 20 years whereas writing was developed over centuries. Humanity is moving online. Print had an edit economic political impact over a long period. Internet has a much shorter time frame.

How to fix it
Keane says it’s important to regain trust in the system, not a faux control. Whose book offers some positive policy alternatives. However Keane says we need greater transparency because we don’t see what is going on insider government what do they are discussing. He says we need an independent anti-corruption body and a taxation system that is fair. Everyone needs to pay their fair share. This system is not working for The average person neoliberalism is the fundamental issue in creating disequilibrium between workers and corporations e.g Aged Care. Keane says we need to get power back to people, participate more and voters can fix the system.

Comment
There are other currents in the political system other than populism, namely opportunism and idealism. Keane says that people are wealthier, this may be true of the middle class but is it true of workers and poor people – his book lacks a class analysis. His critique is eurocentric focusing on the West. He places faith in parliamentary democracy which has not delivered anything like worker control of production. On the other hand no one has come up with a solution for the current malaise. The former Australian Deputy Prime Minister and Foreign Minister, Julie Bishop, describes the instability of parliamentary democracy this way: ‘Australia has become the coup capital of the world’. Whilst this is an exaggeration, no government has fallen, it shows failure of parliament to face environmental, social, economic and political crisis ahead. 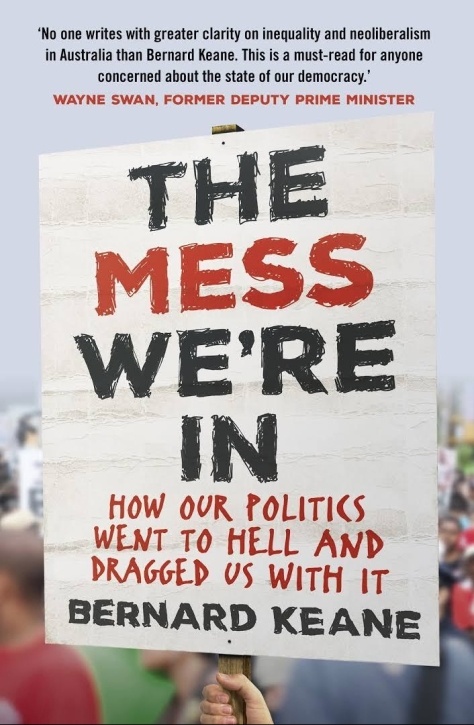 Afghanistan: US drone strike kills aid worker and his family

What to do if you get sick with Covid 19